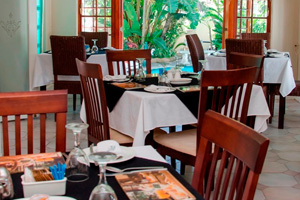 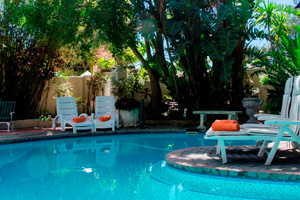 Things To Do In Port Elizabeth

We are 5 minutes from the airport and one of South Africa’s top golf courses and within close walking distance of the Boardwalk Casino and Entertainment Complex and many top restaurants, pubs and shopping centres. Port Elizabeth is situated in the Eastern Cape which is the “Adventure Province” of South Africa. Have a look at a list of things to do in Port Elizabeth and the Adventure Province.

Approximately 65 kilometers west of Brighton Lodge (an easy 45 minute drive on the national highway) lies the surfers paradise of Jeffreys Bay (www.jeffreysbaytourism.org) one of the best right-hand point breaks in the world including the famous “Super-tubes”. A whole industry has been created around J-Bay’s (as it is locally known) surfing fame and local craft shops, clothing shops, coffee shops and restaurants create a special laid back ambiance. You can also visit the Jeffreys Bay Surf Museum and the Shell Museum. Another 35 kilometers down the road lie the quaint villages of St Francis Bay and Cape St Francis. St Francis bay is one of the most unique seaside villages in the world. All the houses are white with black roofs and approximately half of the village is built around the largest web of man-made canals and waterways in Africa. Take a boat cruise along the canals and onto the magnificent Kromme River which flows past the village. Visit the port at Port St Francis and have a meal in one of the many local restaurants. A few kilometers away you will find the more rustic seaside village of Cape St Francis with its magnificent stretch of beach. On the “wild side” you can climb the historic Seal Point lighthouse, the tallest masonry tower on the South African coast.

Take the plunge off the Bloukrans Bridge 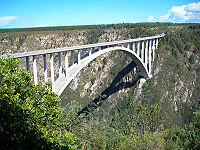 Make the highest commercial bridge-jump in the world off the Bloukrans Bridge – an awe-inspiring 216 meters. Situated approximately 150 kilometers west of Brighton Lodge along the famous and beautiful Garden Route an excursion to the bridge is a comfortable day trip from Brighton Lodge. Almost anyone can do it – if a 95-year old can do it so can you! The only rules are that you must be over 14 and weigh more than 35 kilograms. Go to www.faceadrenalin.com for more details. 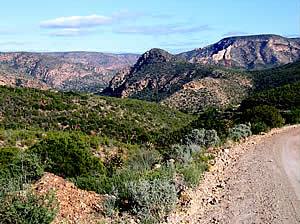 There is a place of great beauty not far from Brighton Lodge – it is called Baviaanskloof (“Valley of the Baboons”). The Baviaanskloof Nature Reserve is one of the largest wilderness conservation areas in South Africa – a mega-reserve comprising approximately 500 000 Hectares of unspoilt mountainous terrain. The reserve is home to over 1 000 different plant species (including Protea and ancient cycads) and more than 50 mammal species (including buffalo, leopard, baboons and a variety of antelope). In addition the reserve provides a habitat for over 300 bird species and a variety of reptiles and amphibians. The condition of the gravel road through the reserve varies depending on the season, but it is definitely not suitable for sedans and at certain times certain sections are only suitable for 4 x 4 vehicles. But for those who like the wilds (and perhaps even for those who think they don’t) it is a road you should travel at least once in your lifetime. You will be rewarded with enduring memories of a magical and mystical place.

A variety of tour options through the Baviaanskloof, including day trips, are available. Ask us to assist you to arrange a tour that suits you. For more information and picture gallery go to www.ecparks.co.za/parks-reserves/baviaanskloof.

Only 80 kilometers and less that 1 hour’s drive from Brighton Lodge you will encounter not only the Big Five but the Big Seven (elephant, lion, buffalo, rhino, leopard, whale and the great white shark) at the Addo Elephant Park. Situated in the malaria free area of the Sundays River valley the 164 000 hectare park is home to one of the densest African elephant populations on earth (over 450), 400 Cape buffalo, over 50 of the endangered black rhino, lion and leopard. Other mammals include a variety of antelope, zebra, jackal, warthog and hyena. The park has been expanded to include a coastal nature reserve and a marine reserve resulting in the addition of whale and great white shark to the traditional “Big 5″. If you are a birder Addo provides you with an opportunity to spot over 150 species of bird. There are approximately 600 different plant species and the park is also home to the endangered flightless dung beetle. When visiting the Addo Park be sure to take comfortable walking shoes, binoculars, camera and a hat and sunblock. Maps and brochures on the park and wildlife reference books are available from the reception at Brighton Lodge.

Addo offers a variety of game drive options including self drive guided tours. Brighton Lodge can also assist you to arrange tours where you will be collected from Brighton and returned at the end of the day.

Tour the battlefields of the Eastern Cape 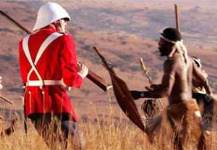 The Eastern Cape was the scene of many fierce battles during the Cape Frontier Wars (also known as the Xhosa Wars) of the 18th and 19th centuries including the battle of Grahamstown where, in 1819, 10 000 Xhosa warriors attacked the village and were repulsed by a small garrison of approximately 330 British troops and civilians. Organised tours will take you through the heart of “frontier territory” where you can relive the conflict that spans 100 years. Day tours are available departing from Brighton Lodge. 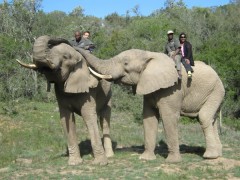 Fancy a once in a lifetime opportunity to get up really close and personal with the giants of the African bush? About 1 hour’s drive from Brighton Lodge you can walk with, feed and ride elephants through the diverse Eastern Cape bush-veld. Experienced handlers share their knowledge and insight into these magnificent beasts and allow you to interact with them in their natural habitat. Afterwards sip a sun downer from a viewing deck and watch them frolicking at their favorite watering hole. This is an African bush experience not to be missed. Talk to us about arranging this unforgettable day trip for you.

A few kilometers down the road from Brighton Lodge is the Cape Recife Nature Reserve. This reserve offers an incredible diversity of outdoor activity. Take a bucket and a net and explore the tidal pools for underwater life including a variety of mollusc, starfish and fish – or simply stroll down the magnificent sandy beaches. The reserve is a bird-watchers paradise where over 190 species can be spotted. Birders come from all over the world to tick off the many rare species of terns which roost here including the endangered Roseate Tern and Antarctic Tern and the rare Damara Tern. Seabirds including many species of gulls and the African Black Oyster Catcher abound. There is also a bird hide on the reclaimed wetland where freshwater species including the Black Crane, African Swamp Hen and Little Bitten can be spotted. The reserve has a number of walking trails of varying lengths catering for the fit and not so fit. Meander through the fynbos and you may spot a Grysbok (a small antelope endemic to fynbos), mongoose, Cape Clawless Otters, bushpig and vervet monkeys – or do some shipwreck spotting from the well-preserved rooftop of the old fortress observation post which was erected in 1940 as a World War II lookout. You will also find the Cape Recife lighthouse which was erected in 1851 (go to www.lighthouses.co.za for more information on this and other lighthouses in South Africa).

Algoa Bay is a great place for whale watching and these giant marine mammals (mostly of the Southern Wright type) come inshore in numbers to breed and to give birth between June and November each year. Ask us to arrange a whale watching excursion for you.

In addition to the Addo Elephant Park there are a variety of game viewing venues available within less than an hour's drive of Port Elizabeth. Included in these venues are private game reserves, a number of which boast the "Big Five" in a malaria free environment. A game and lion park is situated a mere 18km from the city centre which allows for close up game viewing on 31 hectares of pristine coastal bush.

There are a number of hiking trails in and around Port Elizabeth:

This is a fantastic, family friendly coastal hike through the Schoemakerskop – Sardinia Bay Nature Reserve. The trail is 8km long and starts at the village of Schoemakerskop 19km west of Port Elizabeth. The trail is named after the wreck of the Sacramento, a Portuguese galleon that ran onto the rocks in 1647. A large canon salvage from the wreck marks the beginning of the trail. The trail takes you from Schoenmakerskop to the Sardinia Bay beach. The trail is free and there are no gate hours. There are several swimming pools along the trail so take a bathing costume in Summer.

This is an easy hike of 9km. The trail winds its way through the beautiful Cape Recife Nature Reserve. At the beginning of the trail you will find the Cape Recife Light House and along the trail you encounter diverse bird life, pristine fynbos, rock pools and unspoilt beaches. The circular hike is perfect for a family outing. A permit is required and can be obtained from the SA Marine Rehabilitation and Education Centre (SAMREC). The trail initially follows the coastline (along the beach) and then detours inland through magnificent coastal fynbos to a bird hide, before returning to the coast. The trail is open daily from 08h30 to 17h00. Entrance fee is R25.00 for adults for R15.00 for children.

This trail forms part of the PE Beachfront promenade. The 2.3km trail from Flatrocks to Pollock beach is mainly along a raised boardwalk. The trail is free and open to walkers and cyclists. Dolphins can often been seen and in June and July whale sightings are common.

This trail, 28km west of the city, comprises dense indigenous coastal forest with abundant bird life and a variety of small animals such as bush buck, bush pig and blue duiker. Along this trail you also encounter the giant sand dunes near the Maitland river mouth. There are 3 marked trails through the dense forest: The 3km circular Peregrine Maitland trail, the 4km Igolomi loop and the 9km De Stades Nature Trail which leads to a view point overlooking the Maitland sand dunes and the bay. The trail is free.

This trail is situated 35km west of Port Elizabeth. The reserves primary aim is to protect the regions unique indigenous Flora particularly the lowland fynbos. Several hiking and biking trails lead through the reserve, including the short fynbos ramble from the centre, the 3km forest walk and 3.6km river walk. The trails are free and are open daily from 08h00 to 17h00.

Note: There is a hiking club in Port Elizabeth called the "PE Hiking Tribe". The club welcomes visitors on their Sunday hikes. Go to www.facebook.com/pages/PE-Hiking- Tribe/1409534642595901

The Humewood Golf Course (one of three courses in Port Elizabeth) is situated 3 kilometers from Brighton Lodge. This links course is consistently ranked as one of South Africa’s top ten courses. In the opinion of the late Bobby Locke who won 4 British Open Championships between 1949 and 1957, this course compares favorably with the top links courses in the British Isles. In addition to Port Elizabeth’s three courses there are a number of other excellent courses within an easy hour’s drive of Port Elizabeth including the highly rated Jack Nicklaus designed St Francis links. 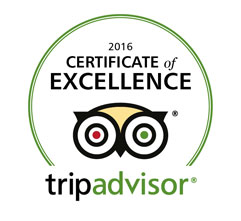